A few years ago, I told my friend “Our TV box subscription is over, we don’t have channels anymore, we just watch Netflix and stuff on our TV”

This all started way back around 2015. Now, don’t expect me to have clear memories of this. I was only 5!

We were in our car (or a taxi, you never know), going to a place where they sold TV boxes and stuff.

We bought this thing with an endless subscription called SKY TV over there.

Now, fast-forward a couple years to 2017, and now I’m 7! This is the era where we were like “man, this SKY TV thing is getting pretty expensive, I think we should give it back” And so we did.

Now, this was also around the time my uncle and aunt visited. My uncle is a real tech-savvy kind of guy, so he bought this thing called a Chromecast (they let you “cast” apps such as YouTube and Netflix to your TV), and hooked it up to our TV.

This time of the story was also when the “channels” thing started up with me and my friend.

Then, a year or so later, we decided that only Chromecast wasn’t enought. We wanted to have ALL THE CHANNELS EVER!!!!! (not really, we just wanted to watch the Cricket World Cup) So, we went to a different place where they sold TV boxes, and bought a decent looking model.

We watched some cricket, and it had some movies too (I watched the entire Harry Potter movie saga on it…)

In late 2020, when we were moving house, we realised that our subscription for the new TV box was over, so we put it in a box (TV box box?) and moved it to our new house anyway, but kept it in the box.

Then, this year, when my friend came over, I showed him the paper book thing, and he was thrilled to see his cameo appearance.

And yeah! That’s the most random true story on this blog! 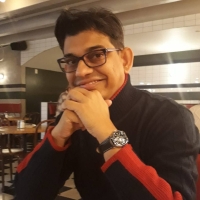